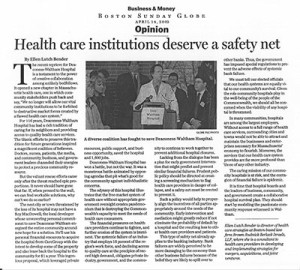 The recent reprieve for Deaconess-Waltham Hospital is a testament to the power of creative collaboration among unlikely bedfellows. It opened a new chapter in Massachusetts health care, one in which community stakeholders push back and say, “We no longer will allow our vital community institutions to be forfeited to destructive market forces created by a flawed health care system.”

For 116 years, Deaconess-Waltham Hospital has had a rich tradition of caring for its neighbors and providing access to quality health care services. The titanic efforts to preserve this tradition for future generations inspired a magnificent coalition of believers. Doctors, nurses, patients, the media, and community, business, and government leaders channeled their energies to protect a precious community resource.

But the valiant rescue efforts came only after the threat reached epic proportions. It never should have gone that far. If, when pressed to the wall, we can find workable solutions, why can’t we do so earlier?

The next city or town threatened by the loss of its hospital may not have a Roy MacDowell, the local developer whose unwavering personal commitment to save Deaconess-Waltham energized the entire community around new hope for a solution. He’ll use his personal financial resources to acquire the hospital from CareGroup with the intent to develop some of the property and also lease back the hospital to the community for $1 a year. This ingenious proposal, which leveraged private resources, public support, and business opportunity, saved the hospital and 1,600 jobs.

Deaconess-Waltham Hospital has won a battle, but not the war. It was a monstrous battle animated by opposing agendas that pit what’s good for the community against individualistic concerns.
The odyssey of this hospital illustrates that the free-market system of health care without appropriate government oversight creates pandemonium that is destroying the Commonwealth’s capacity to meet the needs of health care consumers.

The financial pressures on health care providers continue to tighten, and further erosion of the system is imminent. The systemic failure of an industry that employs 15 percent of the region’s work force, and declining access to quality care at the precipice of record high demand, obligates private industry, government, and the community to continue to work together to prevent additional hospital closures.

Lacking from the dialogue has been a plan for early government intervention that might predict and prevent similar financial failures. Prudent public policy should be directed at creating a screening mechanism to flag health care providers in danger of collapse, and a safety net must be erected to prevent it.

Such a policy would help to properly align the incentives of all parties appropriately around the needs of the community. Early intervention and mediation might greatly reduce if not eliminate the probability of default by a hospital and the resulting loss to other health care providers and patients.

This type of safety net already applies to the banking industry. Bank failures are widely perceived to be more damaging to the economy than other business failures because of the belief they are likely to spill over to other banks. Thus, the government has imposed special regulations to prevent the adverse effects of systemic bank failure.

We must tell our elected officials that our health systems are equally vital to our community’s survival. Given the role community hospitals play in the well-being of the people of the Commonwealth, we should all be concerned when the viability of any hospital is threatened.

In many communities, hospitals are among the largest employers. Without access to a full range of health care services, surrounding cities and towns would not be able to attract and maintain the businesses and enterprises necessary for Massachusetts’ economy to flourish. Moreover, the services that our health care system provides are far more profound than those of any other industry.
The caring mission of our community hospitals is at risk, and the contagion of financial failure is epidemic.

It is time that hospital boards and the leaders of business, community, and government create a collaborative hospital survival plan. They should start by modeling the passionate community response witnessed in Waltham.