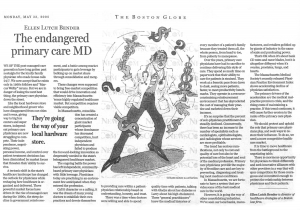 We of the post-managed-care generation have long gotten past nostalgia for the kindly family physician who made house calls 24/7. We now accept that he exists only in 1950s folklore and “Marcus Welby” reruns. But we are in danger of losing the next best thing, the primary care physician down the street.

Like the local hardware store and neighborhood grocer who have disappeared from our cities and towns, giving way to big box centers and super stores, independent primary care physicians are now struggling to compete. Their independence, negotiating power, personal income, and control over patient treatment decisions has been diminished by market forces that threaten their ability to survive.

A tectonic shift in the state’s health care landscape has changed the outlook for physicians while reshaping how health care is organized and delivered. Three powerful market forces have driven it: the rise of managed care during the 1990s, the steep decline in government reimbursement, and a battle among market participants to gain leverage by bulking up on market share through consolidation and mergers.

These changes were supposed to bring free-market competition that would drive innovation and efficiency into Massachusetts’sonce highly regulated health care market. But competition requires viable competitors.

In Massachusetts, consolidation has created a concentration of giant market participants whose dominance has decreased competition, hurt independent physicians and failed to produce the forward-looking innovation so desperately needed in the state’s beleaguered health care market.

The ongoing battle for power has left independent, community-based primary care physicians with little leverage. Physicians today are practicing in an environment few anticipated when they entered the profession.

Call it character or a calling, it was the dream of many young doctors to establish their own practices and devote themselves to providing care within a patient-physician relationship bases on understanding, honesty, and trust.

There was a time when doctors were willing and bale to spend quality time with patients, talking with Gladys about her diabetes or Larry about his high cholesterol. These “general practitioners” knew the medical histories of every member of a patient’s family because they treated them all, the whole person, from head to toe, from puberty to menopause.

Over the years, primary care physicians have had to sacrifice to continue delivering this style of care. They spend so much time on paperwork that their ability to care for patients is strained. They work at a frenetic pace from dawn to dusk, seeing more patients, faster, to meet productivity benchmarks. They operate in a resource-constraining reimbursement environment that has skyrocketed the cost of managing their practice and ratcheted down their incomes.

It’s no surprise that the percent of solo physician practitioners has steadily declined. Concurrently, there has been an increase in the number of specialists such as cardiologists, ophthalmologists, and radiologists whose services are more profitable.

The trend has serious ramifications, not only to cost and quality of care but also in the potential loss of the heart and soul of the medical profession. Primary care physicians provide the majority of frontline care and are key to preventing, diagnosing and treating most medical conditions.

In Massachusetts, we are fortunate to have a system that provides some of the best medical care in the world.

However, it is going the way of other consolidating industries. We’ve seen our local banks, manufacturers, and retailers gobbled up by giants of industry in the name of scale and purchasing power.
That’s OK when it’s about bank CD rates and razor blades, but it is altogether different when it’s ovaries, prostates, lungs, and hearts.

The primary drivers of the acceleration are the medical malpractice premium crisis, and the rising costs of maintaining a practice. If this trend continues, it will cause further erosion in the ranks of the primary care physician.

We should protect and uphold the role that primary care physicians play, and seek ways to restore their influence. To do so, we need a more competitive health care market.
It is time to move health care from the battleground to the negotiating table.

There is enormous opportunity for physicians to think differently and seek innovative alliances with other providers in a way that will spur competition for those courageous and committed enough to protect the relationship between physicians and their patients.