The End of Equal Health Care?

The End of Equal Health Care? 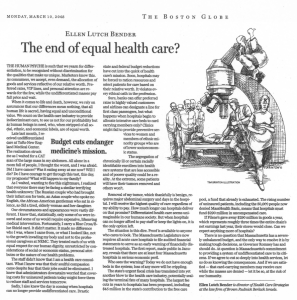 The human psyche is such that we yearn for differentiation, to be recognized without discrimination for the qualities that make us unique. Marketers know this. As consumers, we accept, even demand, the allocation of goods and services reflective of our relative worth. Preferred rates, VIP lines, and personal attention are rewards for the few, while the undifferentiated masses pay full price and wait.

When it comes to life and death, however, we rely on assurances that our differences mean nothing, that all human life is sacred, having equal and unconditional value. We count on the health care industry to provide indiscriminate care, to see us not for our profitability but as human beings in need, who, when stripped of all social, ethnic, and economic labels, are of equal worth.

Late last month, I received undifferentiated care at Tufts-New England Medical Center. The realization struck me as I waited for a CAT scan of the large mass in my abdomen. All alone in a room full of people, I thought the worst, and I was afraid. Did I have cancer? What it eating away at me now? Will I die? Do I have courage to get through this test, this day, my prognosis? What will happen to my family?

As I waited, wanting to flee this nightmare, I realized that everyone there may be facing a similar terrifying health unknown: The Russian couple who had brought their infant son for tests, an Asian couple who spoke no English, the African-American gentleman who sat in silence, as did a tired, elderly woman and her daughter.

Our circumstances and appearances were vastly different. I knew that, statistically, only some of us were insured, and some of us would require expensive, lifesaving medical intervention. Fortunately, I carry a Blue Cross/Blue Shield card. It didn’t matter. It made no difference who I was, where I came from, or what I looked like, not to the growth invading my body and not to the professional caregivers at NEMC. They treated each of us with equal respect for our human dignity, unrestricted by consideration of social or economic status, personal attributes or the nature of our health problems.

The staff didn’t know that I am a health care consultant. What I knew was that their soulful compassion came despite fear that their jobs could be eliminated. I knew that administration downstairs worried that covering costs for uninsured patients today might force them to reduce staff and services tomorrow.

Sadly, I also knew the day is coming when hospitals can no longer provide undifferentiated care. Drastic state and federal budget reductions have cut into the quick of health care’s mission. Soon, hospitals may be forced to ration resources and select patients for care based on their relative worth. It violates every ethical oath in the profession.

Sure, banks can offer preferred rates to highly valued customers and airlines can designate a line for first class passengers, but what happens when hospitals begin to allocate intensive care beds to card carrying members only? Clinics might fail to provide preventive services to women and members of ethnic minority groups who are of lower socioeconomic status.

The segregation of chronically ill or certain racially identifiable enrollees into health care systems that are less accessible and of poorer quality could be a reality. At the extreme, some patients will have their tumors removed and others won’t.

Removal of my tumor, which thankfully is benign, requires major abdominal surgery and days in the hospital. I will receive the highest quality of care regardless of my ability to pay. How much longer can hospitals deliver on that promise? Differentiated health care seems unimaginable in our humane society. But when hospitals can no longer afford to pay staff or keep the lights on, it is the only option left.

The situation is this dire. Proof is available to anyone who cares to look. The Massachusetts legislature now requires all acute care hospitals to file audited financial statements to serve as an early warning of financially distressed hospitals. The first report, made public in January, reveals that there are at least four Massachusetts hospitals in serious economic peril.

Who sees the warning? Today we do not have enough beds in the system; loss of any more will be crippling.

The state’s urgent fiscal crisis has translated into yet another blow to the health care industry, potentially sealing the terminal fate of many hospitals. The largest fee cuts in years to hospitals has been proposed, including $45 million in the state’s contribution to the free care pool, a fund that already is exhausted. The rising number of uninsured patients, including the 50,000 people now denied MassHealth Basic, means that hospitals must fund $290 million in uncompensated care.

If Filene’s gave away $200 million in goods a year, which represents roughly three times the entire chain’s net earnings last year, their store would close. Can we expect anything more of hospitals?
There is no question that Massachusetts has a severely unbalanced budget, and the only way to resolve it is by making tough decisions, as Governor Romney has and should do. At question is Massachusetts’s commitment to providing a system of undiffentiated care to its citizens. If we agree to cut so deeply into health services, let us do so knowing the consequences. And if we are satisfied—that card-carrying members may receive care while the masses are denied—let it be so, at the risk of our humanity.