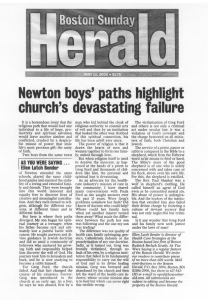 It is a horrendous irony that the religious path that would lead one individual to a life of hope, productivity and spiritual salvation would leave another aimless and conflicted, crushed by a despicable misuse of power that stole life’s most precious gift: the unity of faith.

Two boys from the same town of Newton attended the same schools, played the same childhood games and enjoyed the stability of a loving and extended family and friends. They were brought into this world innocent and equally free to discover lives of creative and meaningful contribution. And they each turned to religion, although for different reasons, at different times and in different faiths.

But here is where their paths diverged. My son began his spiritual journey as a teenager, when his father became sick and ultimately lost a painful battle with cancer. He sought answers and divine guidance in Jewish doctrine and did so amid a community of believers who nurtured his growing faith and responsibly helped him discover the will of God. His journey took him to Jerusalem and back, and he is now studying to become a rabbi himself.

For Greg Ford, the church failed. And that fact changed the course of his existence forever. Greg was introduced to the church at an early age. As a boy, he says he was abused, first by a man who hid behind the cloak of religious authority to commit acts of evil and then by an institution that looked the other way. Robbed of this spiritual connection, his life has been adrift ever since.
The power of religion is that it draws the hearts of men and women together to form one family, united through love.

But when religion itself is used to deceive the innocent, as happened at the hands of a priest to Greg Ford and thousands of children like him, the personal and spiritual loss is devastating.
As an advocate for the health care industry’s mission of care in the community, I have shared many conversations with Paula Ford as she sought answers over the past 15 years. Were Greg’s problems somehow her fault? Did I know of doctors who could help? Where could her family turn when yet another insurer turned them away? What made the difference between the path her son was following and the one my son was leading?

The difference was not quality of health care, family upbringing, genetics, Catholicism, Judaism, or the proselytization of any one doctrine. Sadly, as it turned out, Greg was brutally victimized, through no fault of his own, by a religious institution that failed in its fundamental responsibility to carry out the will of God and in its divine healing mission. Greg was betrayed and abandoned by the church and then left the ward of the health-care industry, whose secular mission also is to heal but which can never right this terrible wrong.

The victimization of Greg Ford and others is not only a criminal act under secular law, it was a violation of God’s covenant and the charge bestowed on all ministers of faith, both Christian and Jewish.

The service of a priest, pastor or rabbi is compared in the Bible to a shepherd, which from the Hebrew word ra’ah means to feed or herd. The Bible’s story of the good shepherd is of one who is solely concerned with and takes care of his flock, above even his own life For this, the shepherd is extolled.

The Rev. Paul Shanley was a wolf in shepherd’s clothing. He called himself an agent of God even as he committed mortal sin. His abuse of power is unforgivable. And the leaders of the institution that extolled him also failed their divine charge by fostering a culture of deviant secrecy that was not only neglectful but criminal.

Is it any wonder that Greg Ford and his family now seek justice under the laws of man?